ROPE and it's story.

It's been many years I have making paintings. I have in the last era begun to make some amazing paintings on Rope, usually braided by myself. I have yet to use anything braided by another, except the factory in their creation of the base material I use. The impetus of my using rope in my art comes from a film called Herb And Dorothy, the Art Collectors of Legendary status. In the film there is a section including Mike Wallace from 60 Minutes in the 80's and he is being directed towards an extremely small artwork on the wall that just happens to be from the legend Richard Tuttle, a small 3 Inch slice of white rope and a small braid nail attaching it to the wall. It took many years for that one moment to soak into my imagination so I could work with it myself. But it hit me one night, like a thief in the night it just broke into my conscious mind and out came the idea that I could paint on a piece of rope. The original ideas have no photo documentation, but they were created in my place in Tamaqua Pennsylvania, I began by actually combining my appreciation for Fred Sandback by stretching my acrylic yarn around different spaces in my studio/home in PA. Then once stretched, usually using four strings instead of one to catch the texture paint. None of them really satisfied me at the time but they did light a fire inside me that came out months later back in Columbus Ohio. Ironic that as I sit here today and kind of wish I had taken some pics of the installations of those works. I can imagine the rough space that was meant to become a nice back room in my painting studio that I never got to move into. The yarn pulled tight in the middle of the room running from floor to ceiling, I had been able to anchor it because the space had been so raw and old without worrying about if I was about to mess up the space. I didn't go very far with the texture paint since at that time it was a bit on the lean side so I had to make sure that what I was messing with wasn't going to rid me of all my paint material. I remember it being a light blue yarn and I used yellow texture paint which created their own play of colors, maybe the reason people stick with white and black in their "developmental" periods is because of the highly contrasting way they play together. The one color really makes the other stand out and therefore can be judged in a more clear manner as opposed to just tossing every color at the work and hoping for the best. I kept the original work up for a few months and checking in on it everyday during my in's and out's of the building. One thing I absolutely loved about the idea of your painting studio below you is as you leave the house everyday, the work is all right there, just staring back at you and asking when you are gonna come play around some more.
For the time being I'll be posting up images of the new rope paintings. Thanks for checking in.
12-05-2021
Acrylic on Braided Poly Rope
28 X 5 IN
71.1 X 12.7 CM

I made this alongside a larger sized as i was enjoying the idea of making a rope painting that reminded me of an old chainsaw chain. One with dried up dirt and wood dust in it. Reminding me of walking out to my Fathers shed and seeing the landscaping tools in their well used states.
Click to enlarge. 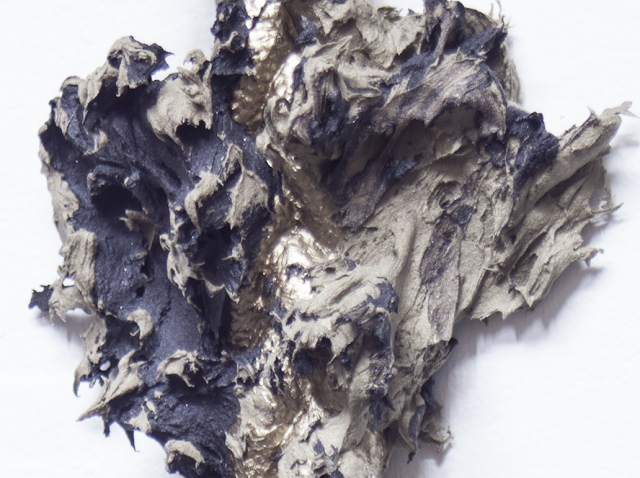 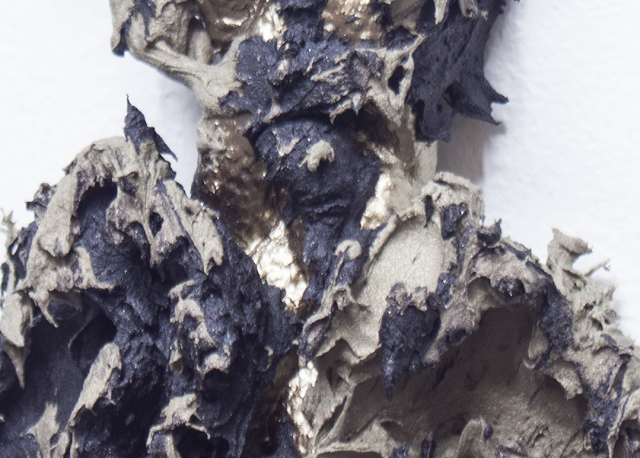 Posted by Jeffrey Collins at 7:45 PM No comments:

Many of you that have been around me know my respect for Barnett Newman and especially his series called Who's Afraid of Red Yellow and Blue. I have over the years found that this choice of colors makes for amazing eye candy in paintings and I love making paintings with this choice of colors. I desired to continue this idea of making paintings dedicated to the primary colors and voila here is another. Enjoy!
Click the images for more details.
02-17-2022 - 02-18-2022
Red Yellow and Blue 2022
9.5 X 6 X 1.5 IN (3 Panels)
Acrylic on Painted Wood Chassis' 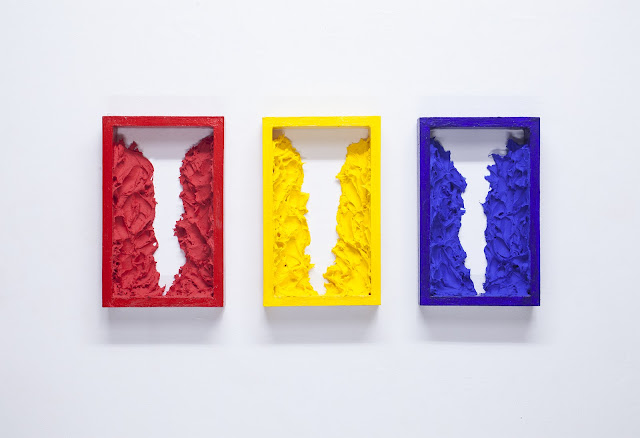 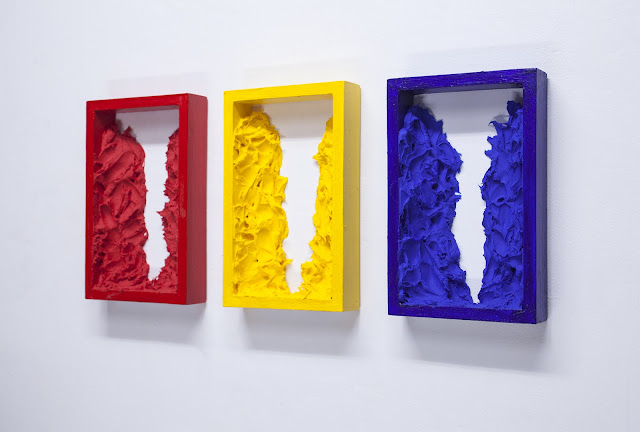 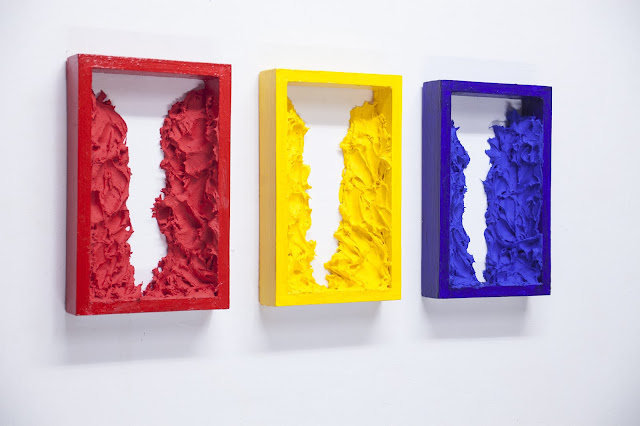 Posted by Jeffrey Collins at 4:18 PM No comments:

Morthond 12-08-2020 (01-13-2021)
14.5 X 11 IN
Acrylic on Painted Wood Chassis
This painting has a bit of a story behind it, along with the title. I had made the chassis a while before the event that happened which changed the course of my day and this painting. I don't really like telling stories like this because it sounds like I'm bragging about something nice I did. But I have yet to really tell many people about it. On the night of the 8th of December. I had went to the mailboxes and on the way there, I passed by a cat that had been laying on the sidewalk and making bad sounds, on the way back, I peeked at him and he really didn't sound good at all. So I went back to the house and grabbed a towel so I could pick him up and bring him into our home so he wouldn't have to freeze while waiting to die. It was such a heartwrenching time that it's still hard to talk about it. I won't tell the whole story here, but once back home, Mom and I cleaned up the area where he had been and we went back to our normal day. As I was in my room, I began thinking about something else I could do to make sure he was never forgotten about. And so I decided to make a dedication painting for him. I called it MORTHOND, as he was the name of a warrior in the movie Circle Of Iron that gets messed up in a fight and needs the hero of the movie to help him die. So now and forever to me his name will always be Morthond and he fought the good fight. He'll always be remembered.
The second date is the date I finished the painting. 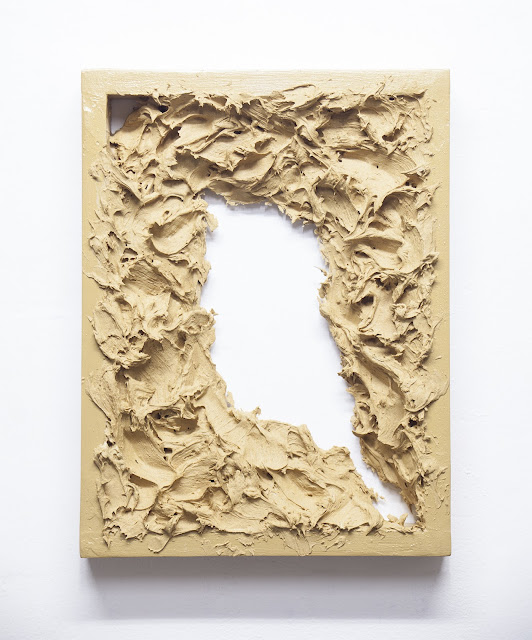 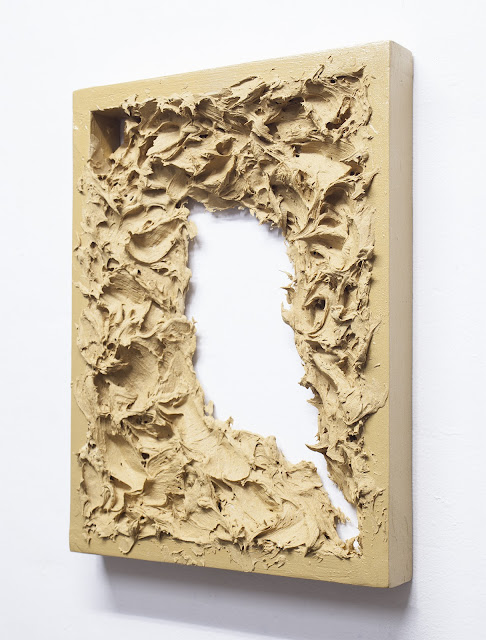 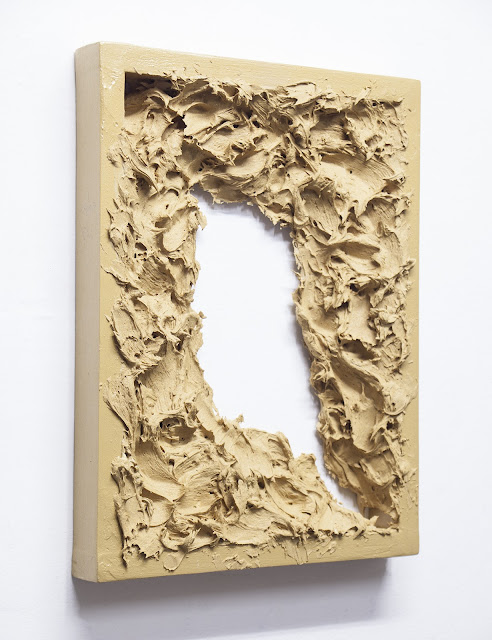 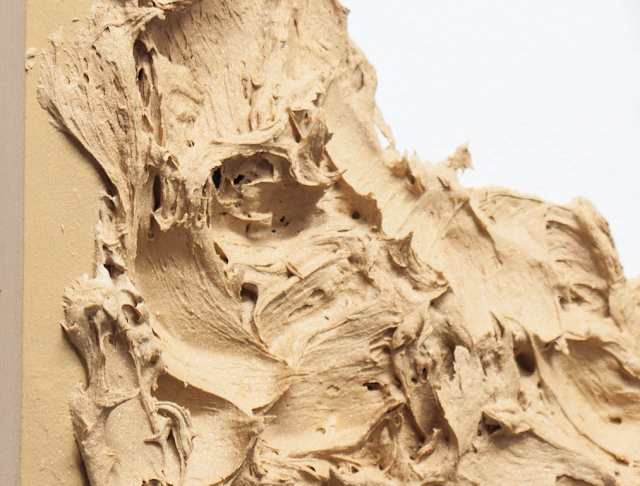 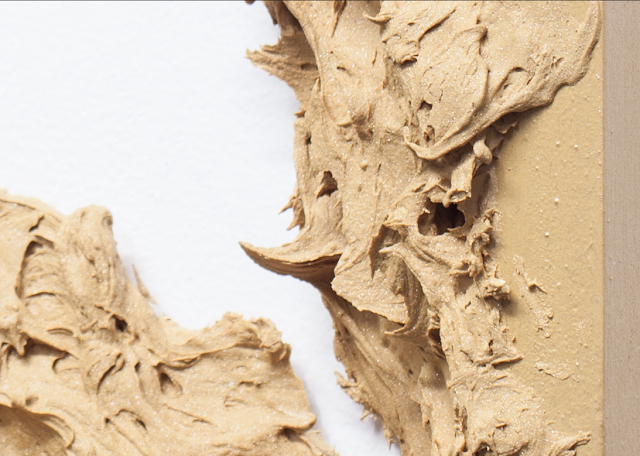 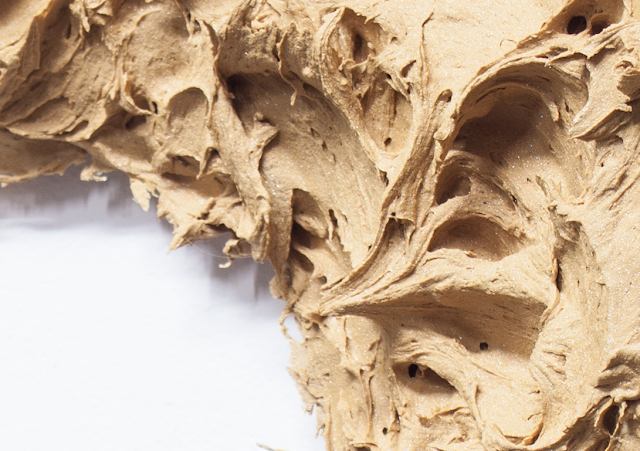 Posted by Jeffrey Collins at 4:09 PM No comments:

03-10-2021
Triptych
9.5 X 6 X 1.5 IN
24.13 X 15.24 X 3.81 CM
Everytime I get to working I get into a mode of desiring to make multiples. So the triptych is a natural method for me in my work. The ability to work over three chassis is very freeing, definitely not the same feeling when working through a large chassis bigger than yourself. But it definitely helps with the urges. I can't help but want to work larger all the time but at the moment I am constrained. But this constraint does allow my mind to wonder into new and amazing methods for the creation of another of my paintings.
Click to zoom in for more detail.
Have a wonderful week!
Jeffrey 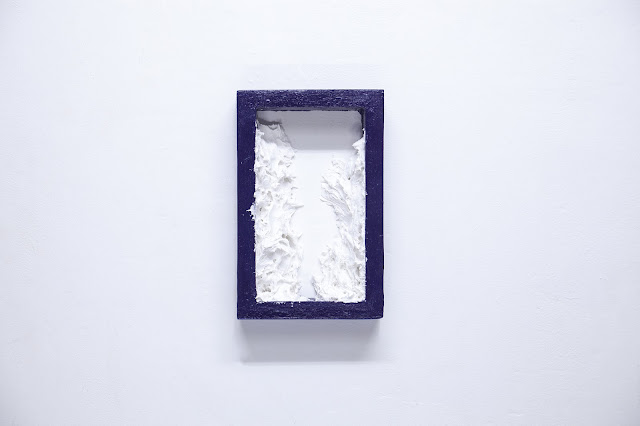 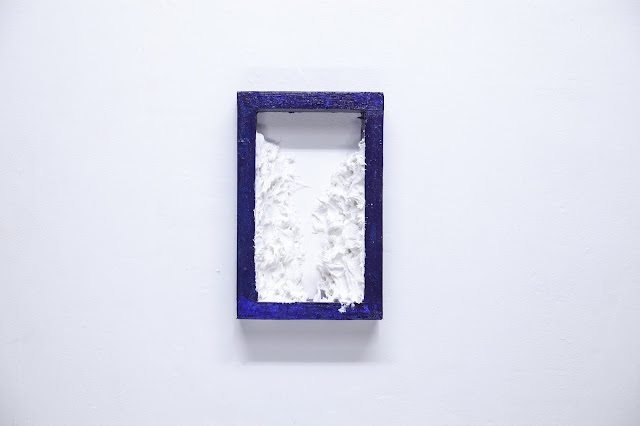 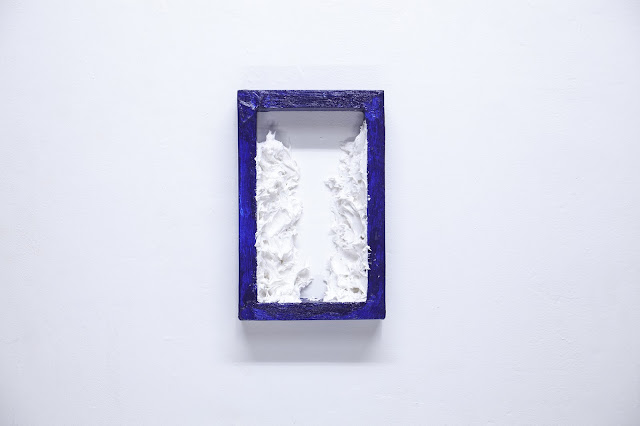 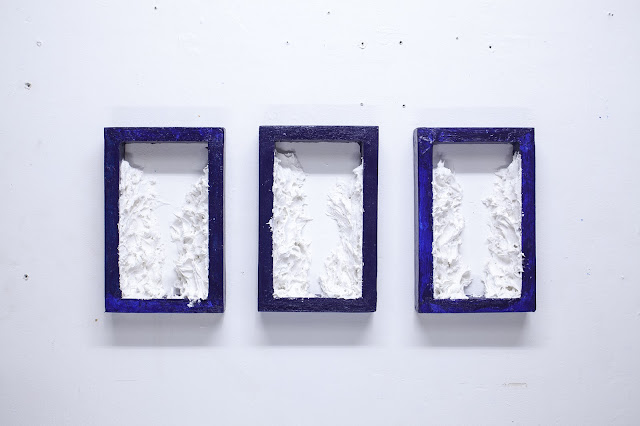 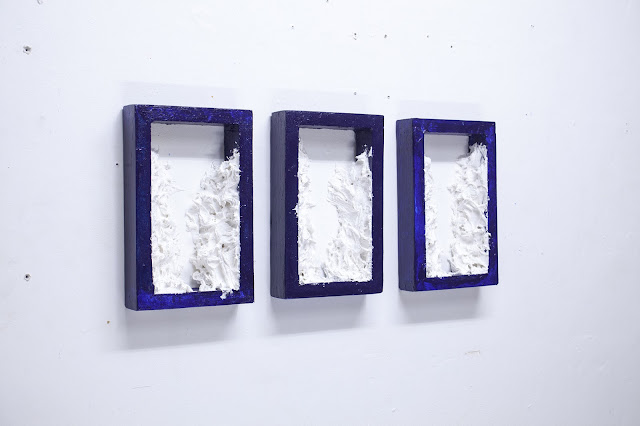 Posted by Jeffrey Collins at 8:14 PM No comments:

05-22-2021
Acrylic on Painted Wood Chassis
22 X 16 IN
55.88 X 40.64 CM
I had recently purchased a bottle of this amazing gold paint from Golden called Iridescent Bright Gold Fine, you know how it is for a painter,  the second you get it home you wanna test it out. After my initial trials, I knew I wanted to hurry up and use this in a larger painting. Hence this. It's such a wonderful paint and is the best representation of what the color Gold is that I have seen over my years of looking at dirty pigments that said they were metallic, from the days of spraypainting my microphone stand that me and my friend found while coming home from school one day. Today's metallic pigments actually look like the metals they are made for.
Click to zoom in for even more detail.
Have a great week!
Jeffrey 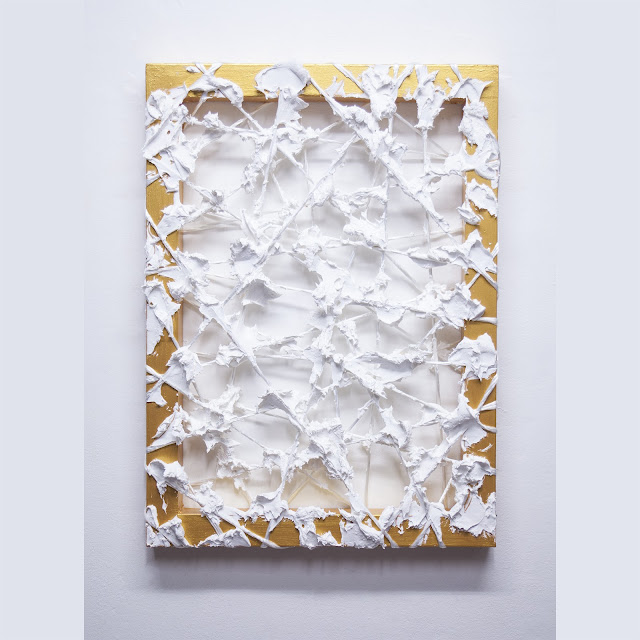 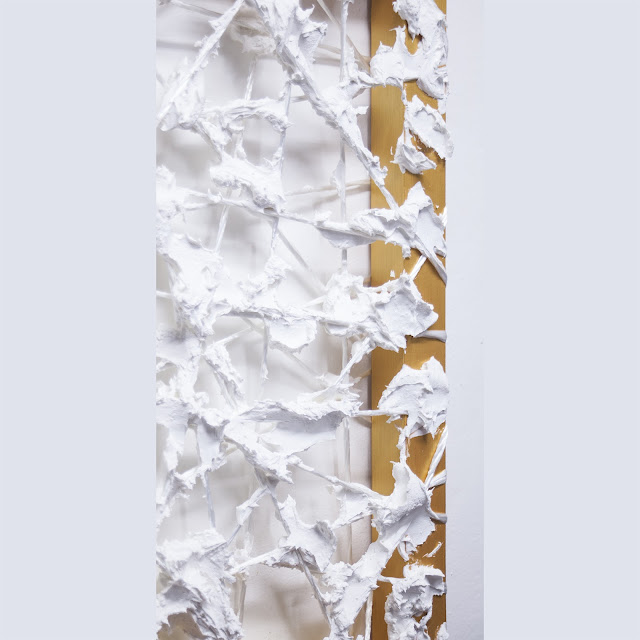 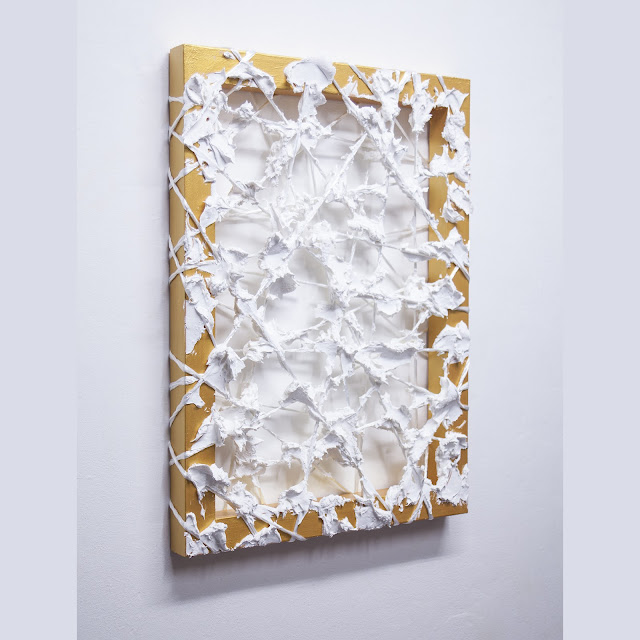 Posted by Jeffrey Collins at 7:03 PM No comments: 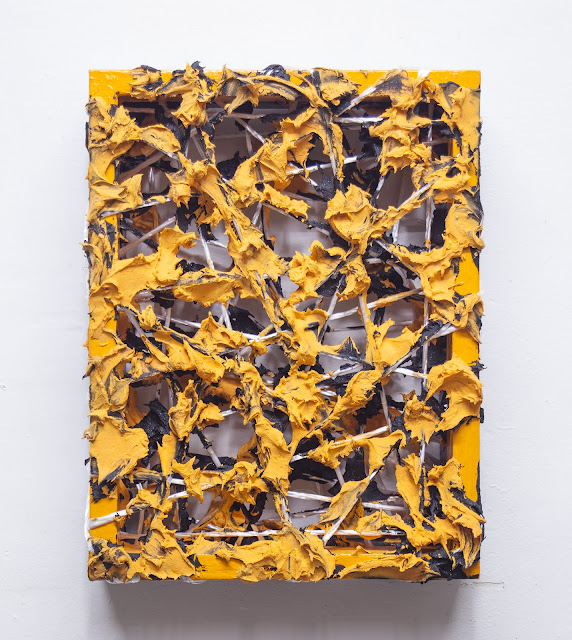 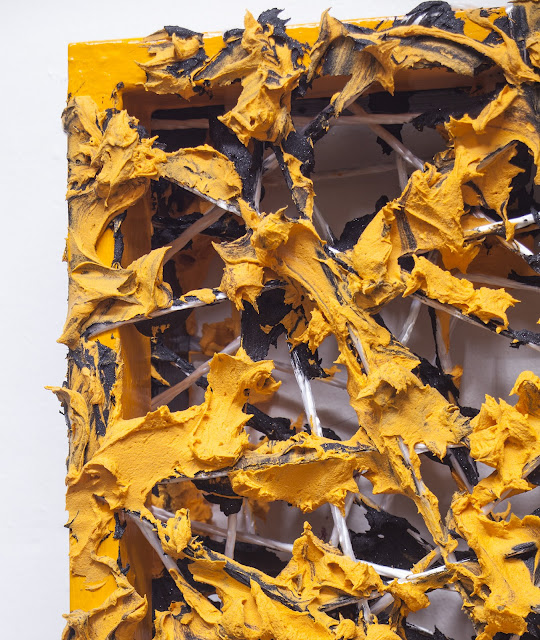 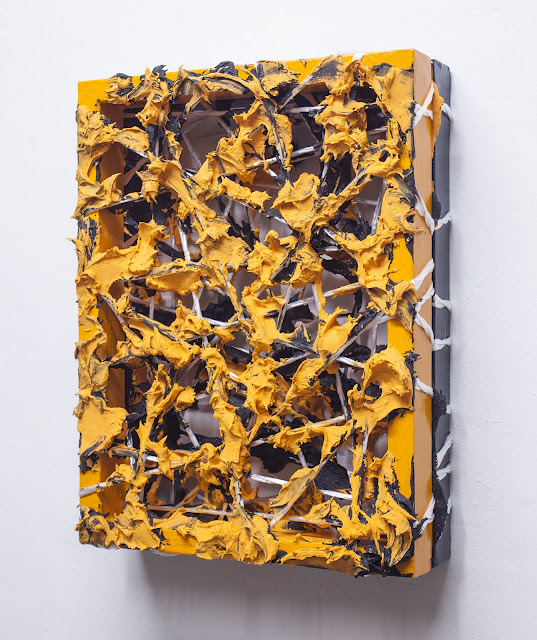 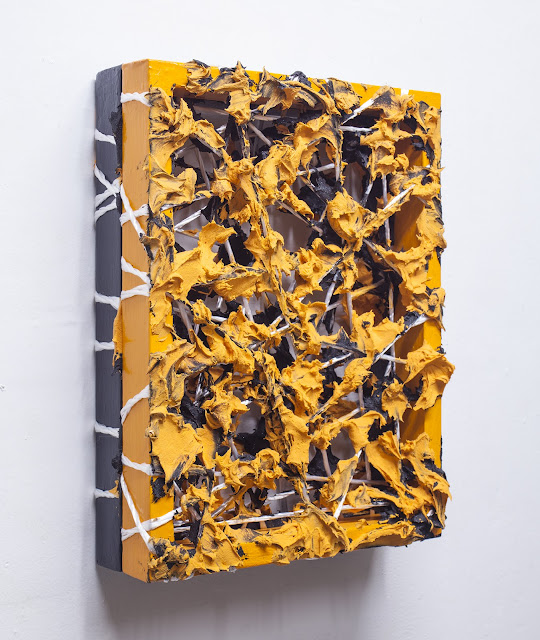 Posted by Jeffrey Collins at 6:47 PM No comments:

07-03-2021
Acrylic on Nylon on Joined Painted Wood Chassis
15 X 11 X 3 IN
38 X 28 X 8 CM
As my paintings have developed, I have constantly in my painting been on a search for even more methods to make a painting. This is a continuation of that desire to see more, not just in one manner, but in every manner. To look, and to look again, to see deep and search out vision.
These are made almost all at once in the painting stage, 2 chassis' at the same time are painted to a point, then joined together and held by the dry paint and then finish painted. I'm looking forward to making many more of these, larger ones also. Gotta see the scaled up versions and their layered looks.
Click to zoom in for more details. 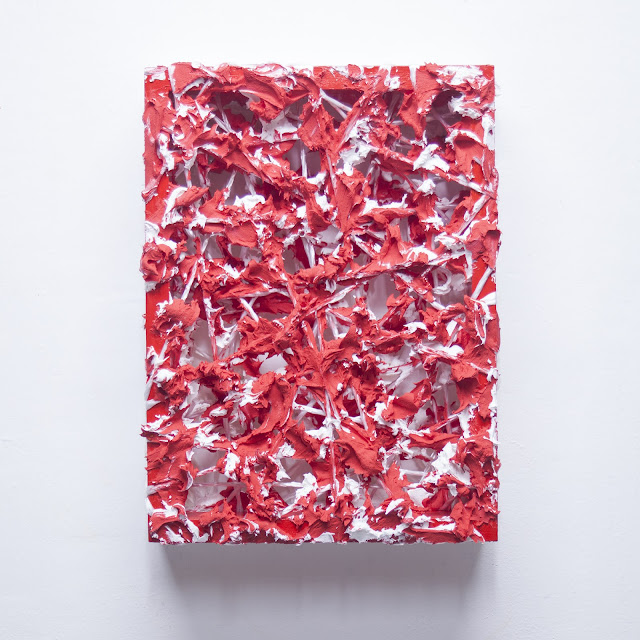 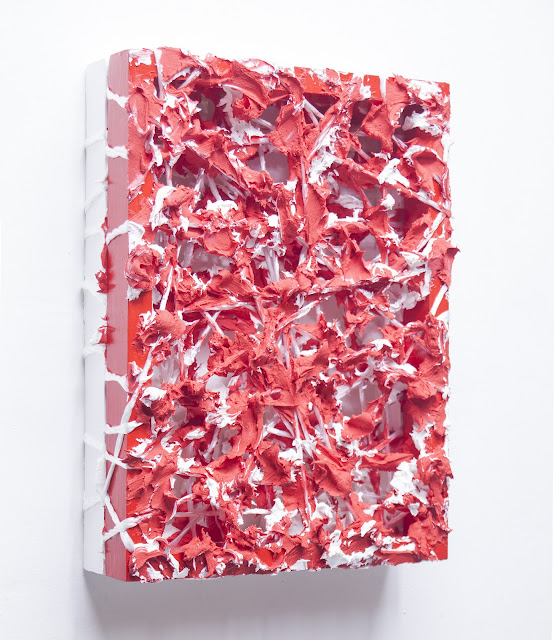 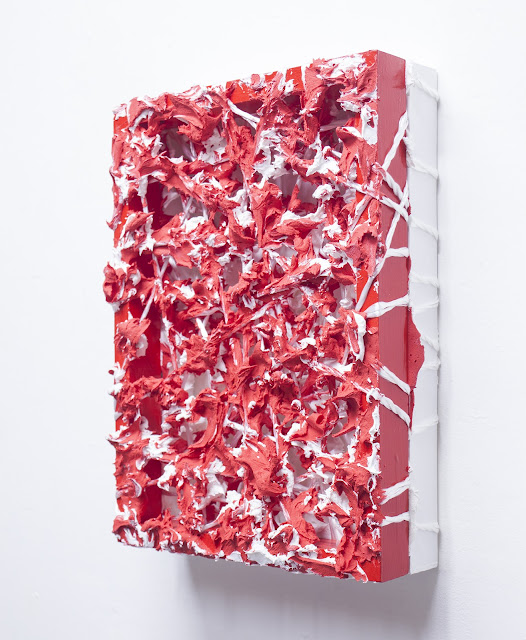 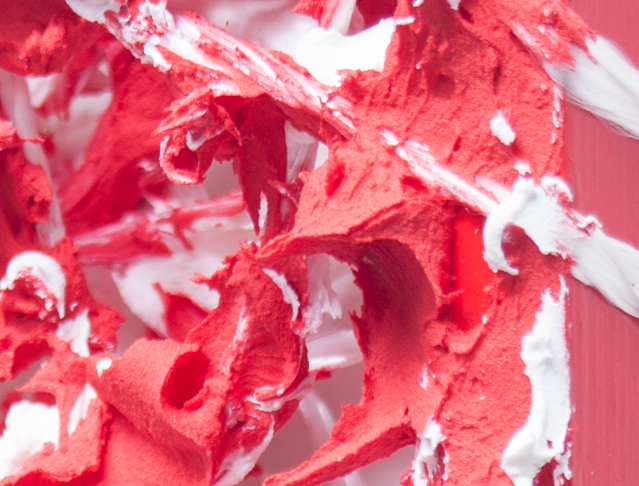 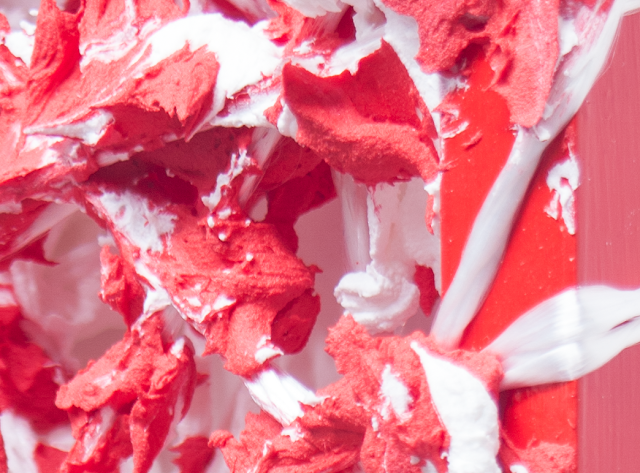 Posted by Jeffrey Collins at 6:37 PM No comments: