I have never been interested in seeing myself in a work of art.

Recently my friend Jimi Gleason has been asking me about silvering a couple of my works as he really wanted to see what they would look like in person. With their multiple multiple viewpoints, they seemed primed for something like this. I have been working on these with the idea of seeing-through, being able to see the front of the painting and the back at the same time has been of interest to me since the night when I envisioned the idea of what became the "Testers". He makes these sweet paintings that are coated with the new silver deposit ability to paint upon anything and make it look like dipped chromoly. His use of the spray booth has really made for some wild paintings without the overt idea of selfie-expression. His works are more about the gleam of light, the reflection and refraction of light and how it plays on the already painted surface. Instead of spending more time trying to describe. I'll let Eric tell you the story of Jimi's work through the eye of his camera.

I've been a fan since I first saw this video, and the others Eric has made of Jimi. You can find them all on his vimeo page.

Jimi has been asking me about silvering a couple of my Testers for a while. So A few months back I got a box together and sent two of them to him. But not before I did a serious talk with him about the methods and means to silver these small things, as he's used to much bigger work, as you can see in the films.

He told me he himself wanted to be able to see what the silver deposit did to the yarn and texture, and as a painter, he too wanted to see how it was going to play out over the entire painting, front, back, sides, and insides. The insides were the most interesting to me too, as that's always the part I wish people would take more interest in but they don't seem to. Not that I have heard of anyway.

So Jimi told me of the process and you can see bits of that process in the photos he took during the priming and silvering process. I hope you find it as interesting as I do. The idea of being able to see how the light plays on the many many ridges, peaks and valleys of the texture really have my eye dancing. Can't wait to see em in person, even though I have already been told I may not ever see them. Seems things are a changing in my world. I'm happy about that.

Here's the pic of them as they left my place. Primed and painted, but obviously not the same way I would normally let them out of my hands. It definitely felt weird to see them head out, knowing they weren't ready for the world just yet. 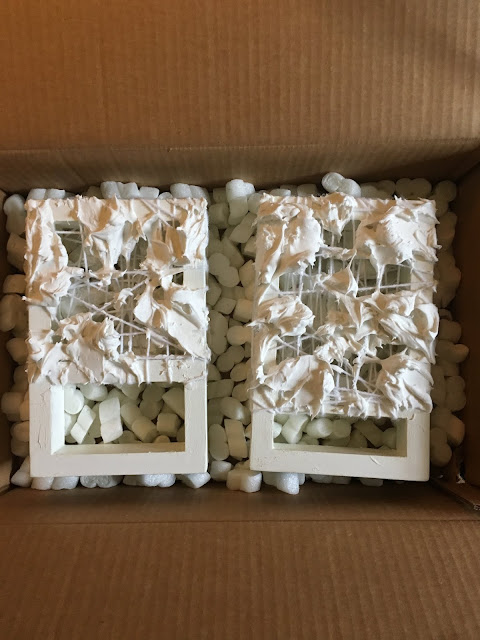 Once they made their way across country to the west side, I got one celebratory photo of Jimi showing his enjoyment of the work so far. Then a few days later he sends me this... 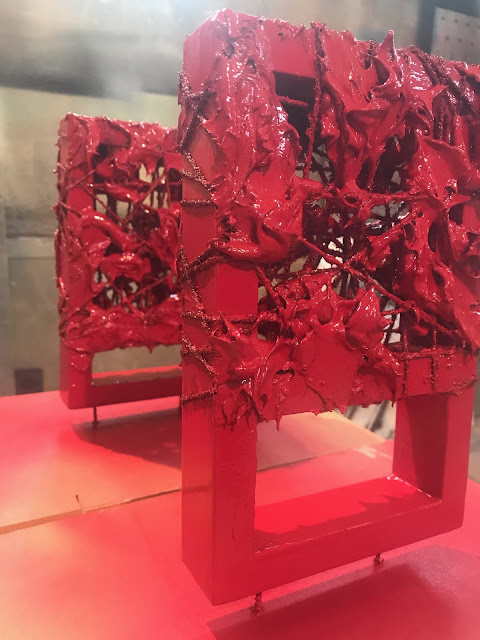 The red definitely woke me up. WOW I thought. I am not a big painter of red paintings but these really opened up new ideas for me which I pretty much began on new work a day after. This is apparently one of the priming stages he has to go through to silver.

And now for some silver. I'll try to get the order of photos correct since he had to silver a few times in order to get the work looking the way he wished it. 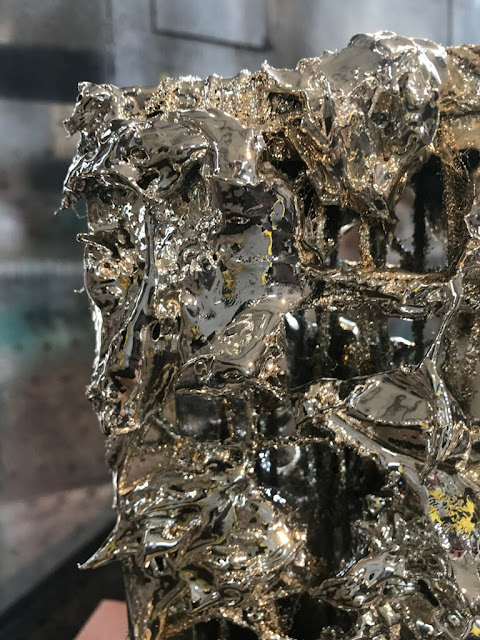 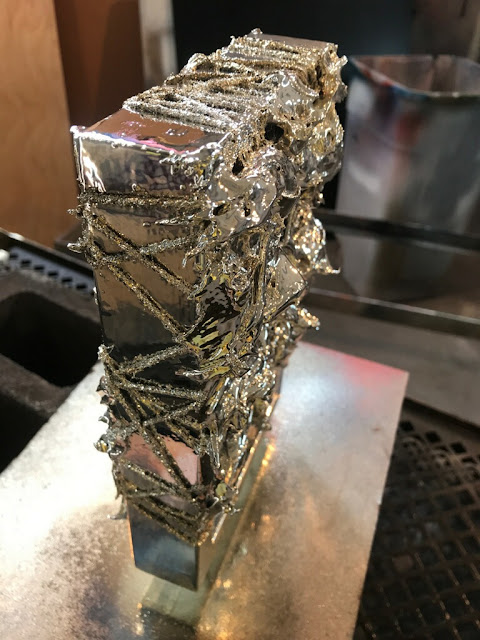 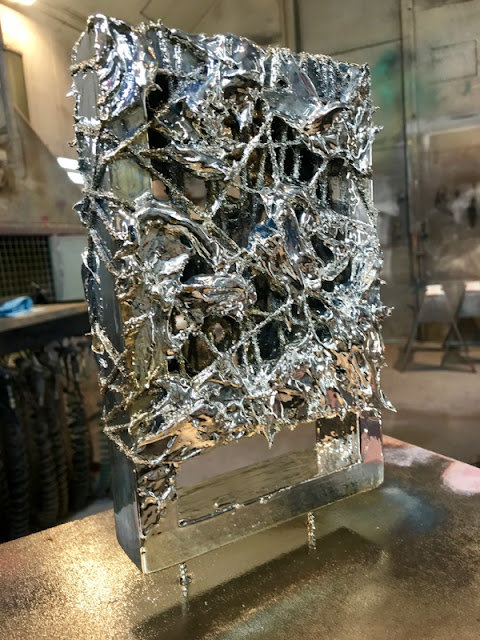 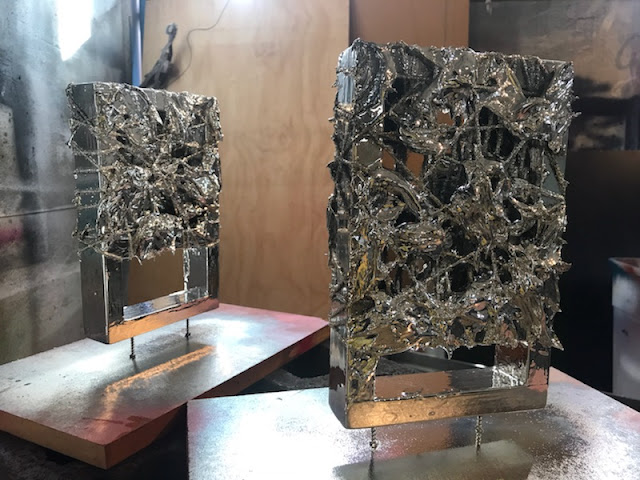 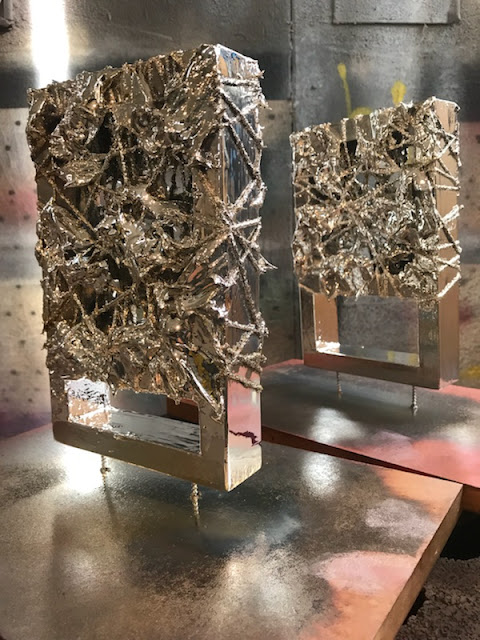 These next photos are after the work is complete. You can see the difference between the gleam of one and the other. The previous work looks like it's been nickel chromed and has a slight coppery look to it. Once the silver has been completed it looks much more like a true dipped chrome piece. 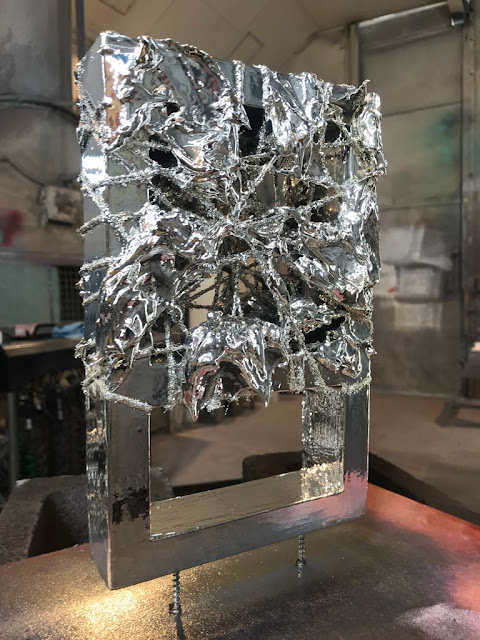 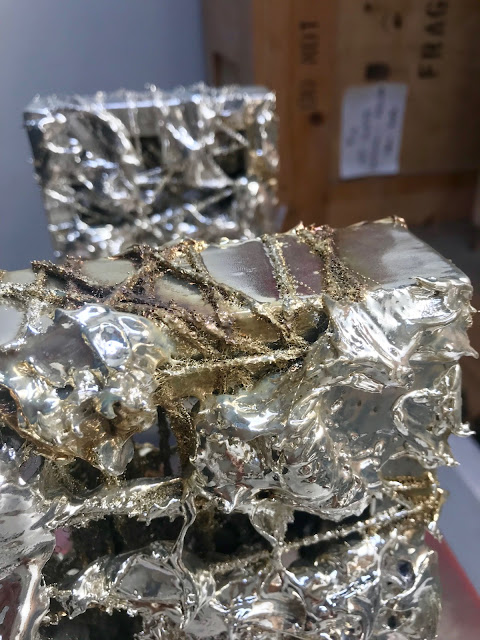 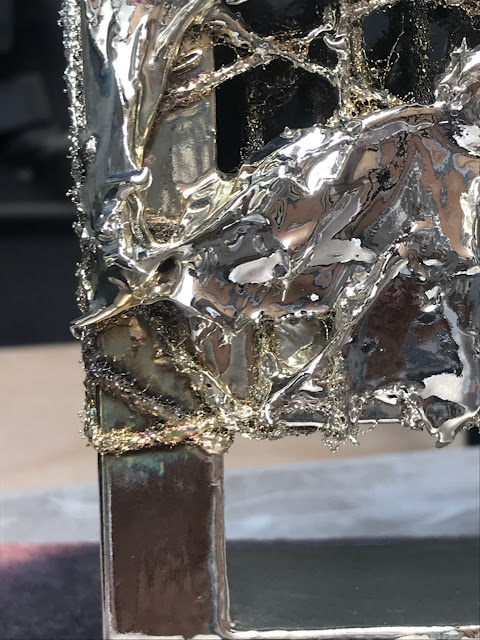 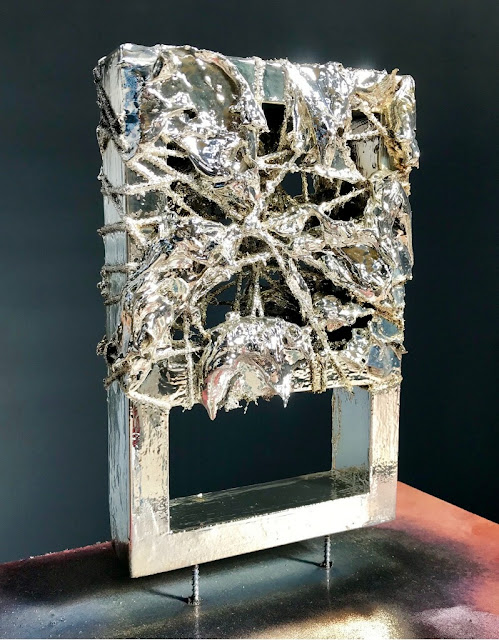 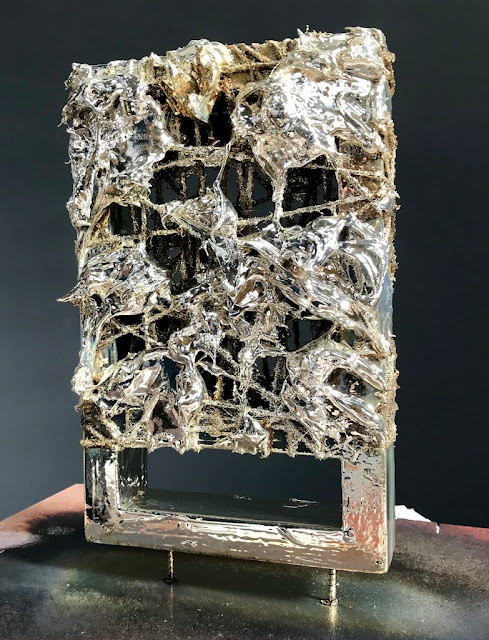 Damn it looks good doesn't it. You can also see more easily the interior, which gives the casual viewer even more to spend time with. For me, the lightening of the interior by use of reflections in silver, is quite the eye opener, I spend much time peering into the dark heart of my paintings and now it shines back at me. As soon as I saw this, my mind began coming up with new directions for works like this. So much to do. So happy for this opportunity that was given to me by a fellow painter. There aren't many these days that have a true sense of collaboration, and I'm so happy to have found one. I look forward to trying more ideas with Jimi in the future. Might even have to move out there.

So I say Thank You for reading this. Thanks to Jimi for your help, guidance and collaboration, and for the photos. And Thanks to Eric Minh Swenson for the videos that attracted me to so many LA based artists.

Posted by Jeffrey Collins at 4:39 PM 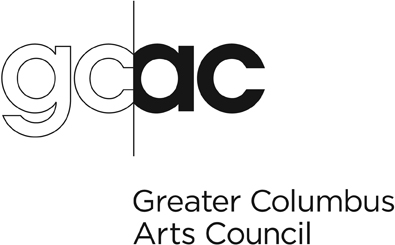